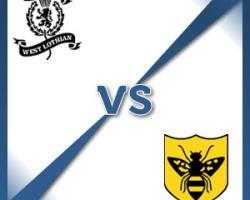 Livingston V Alloa - view commentary, squad, and statistics of the game live.Jacobs to be assessedLivingston will give Keaghan Jacobs until the last minute to prove his fitness ahead of Alloa's visit.The midfielder picked up a knock in last weekend's 1-1 draw with Cowdenbeath

Brad Donaldson remains out with an ankle injury and Gary Glen is missing with a knee problem as recently-appointed manager Mark Burchill looks for his first win.Burchill said: "We shot ourselves in the foot last Saturday by giving away an unacceptable goal and missing lots of chances."Hopefully we can put that right against an Alloa side who are playing a lot better than their recent points total would indicate that they are."Alloa will look to create a five-point gap on their hosts without the services of Iain Flannigan (back) and Adam Ashgar (foot).Manager Barry Smith's search for new players has proved to be unsuccessful so far.Smith said: "We are on a disappointing run results wise, however I cannot criticise the performances the players are putting in

We are playing well but we are not converting pressure into a goal and that is not just aimed at our strikers as other players have had chances."If we play well at Livingston and get the points we deserve we will have given ourselves a real boost."